We went to see Fakenham Museum of Gas and local History. 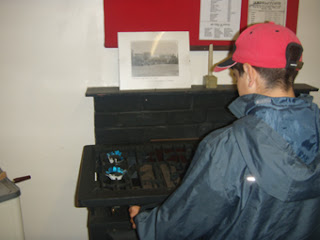 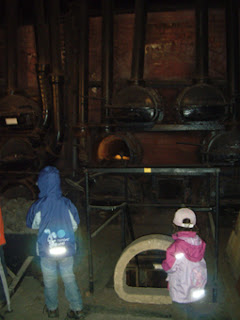 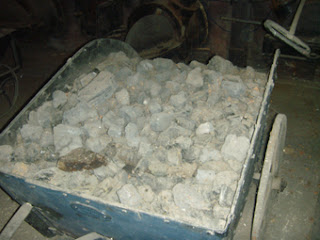 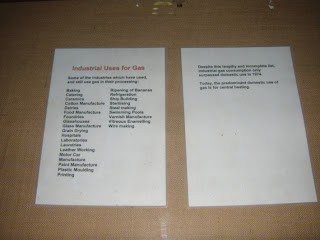 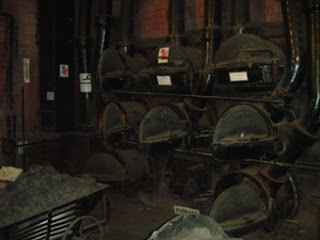 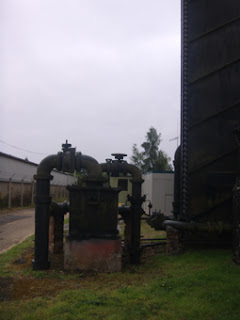 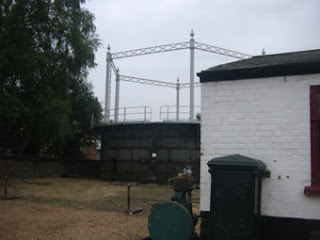 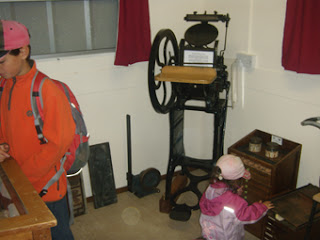 For those who want to know more:
Fuer interessierte:


What’s it all about?

Until the middle of the 19th century houses were lit with candles or (if you were wealthy) with oil lamps. Cooking was done over an open fire or on a coal fired range.

In 1846, the Fakenham Gas & Coke Co. built a gasworks just across the river on the border of Fakenham and Hempton.

The original retort house was situated where the purifying boxes are today and the gas holder (Gasometer) was situated on the circular paved area opposite the entrance, it held 15000 ft of gas. Coal was probably brought from Well’s harbour until the railway arrived in Fakenham in 1849.

By October 1846 Fakenham’s streets were lit by gas. Those who could afford it were now able to light their houses and cook with gas.

With the rapid expansion of Fakenham in the Victorian era the gas works needed to supply more households. In 1856 the works was enlarged and a second gasometer was installed on the site of the present retort house.

Later, in 1888, the original gasometer was replaced by another to the south west of the site. This is the one we see today. The second gasometer was later removed.

By 1910 the present retort house had been completed with two sets of retorts and an overall more sophisticated manufacturing process of gas making was installed but with gas storage in the 1888 gasometer.

It was to be 1924 before Fakenham had a second gasometer again.

Although WW1 brought its problems to Fakenham Gas Works it carried on as normal and between the wars more households were connected to its supply although for many it was just for cooking. Electricity had arrived and gas had to compete for lighting.

WWII brought problems in the form of a blackout requirement. The open side of the retort house had to be covered with tarpaulins to prevent the light shining out. Eventually a brick lean-to was built making it easier for the stokers to work.

There was also the worry that the gas mains would be damaged by bombing. It is thought that this only happened once.

In 1949, Fakenham Gas Works, now supplying some 500 customers, was taken into the Eastern Gas Board which operated the site until it ceased production. By then Fakenham Gas Works was quite run-down and any items of plant that needed replacement were exchanged for secondhand equipment from works around the country.

In the late 1960s Fakenham was supplied from Norwich as the national grid for gas was gradually developed.

Finally, North Sea Gas arrived in Fakenham and most local appliances were converted to work on it. Those that could not be converted had to be scrapped.

The Fakenham works was no longer needed, a few bits of equipment were taken way and all staff had left the site. It was finally closed in 1965.

Since it was scheduled as an ancient monument the site was left untouched until 1985 when it was reopened as a museum.

This is where the gas was actually made. Coal was heated in the retorts, a form of oven with the air excluded, so it would not burn. The heat came from a furnace beneath the retort setting. There are two retort settings here, one on the right with six retorts and the one on the left with eight. Each setting had its own furnace enabling them to be used singularly or together depending on the expected demand for gas.

What happened to the coal?

When heated the coal gave off gases and tarry vapours which passed up the black pipes (Ascension Pipes) into a collection tank (Hydraulic Main) containing water that acted as a seal preventing fed back. The gas then goes along the pipe (Foul Main) running round the three walls of the Retort House to outside.

Coke is “pyrolized” coal, or coal that has been heated up to 1300° C but not burned. Treatment with heat removes the gaseous components of the coal. The resulting coke is almost pure carbon. Pollution generated by coke making is of substantial environmental concern. The major sources of pollution are air releases of gases and particulate matter escaping from doors and lids, and air and water pollution from quenching operations. Air pollution control devices also produce “scrubber” wastewater.